Sky Haven opened on December 7. Some 150 aircraft and several thousand people were present for the dedication festivities. In the midst of the celebration, a pilot brought word of the Pearl Harbor attack from the Las Vegas Army Air Field, stopping the show. 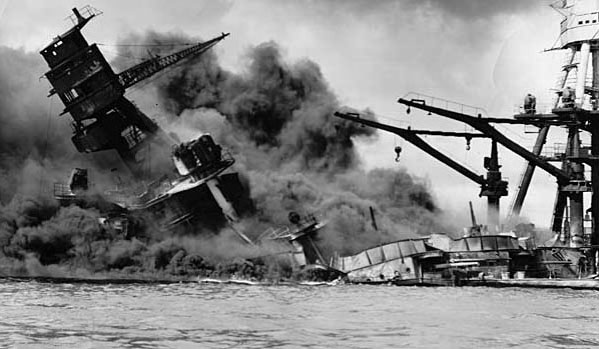 In the midst of the celebration, a pilot brought word of the Pearl Harbor attack from the Las Vegas Army Air Field, stopping the show. 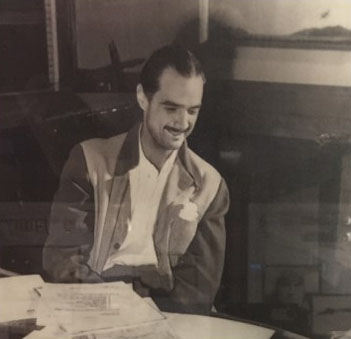 Howard Hughes flew his Sikorsky S-43 to North Las Vegas. The plane was damaged and had to be repaired before testing at Lake Mead. 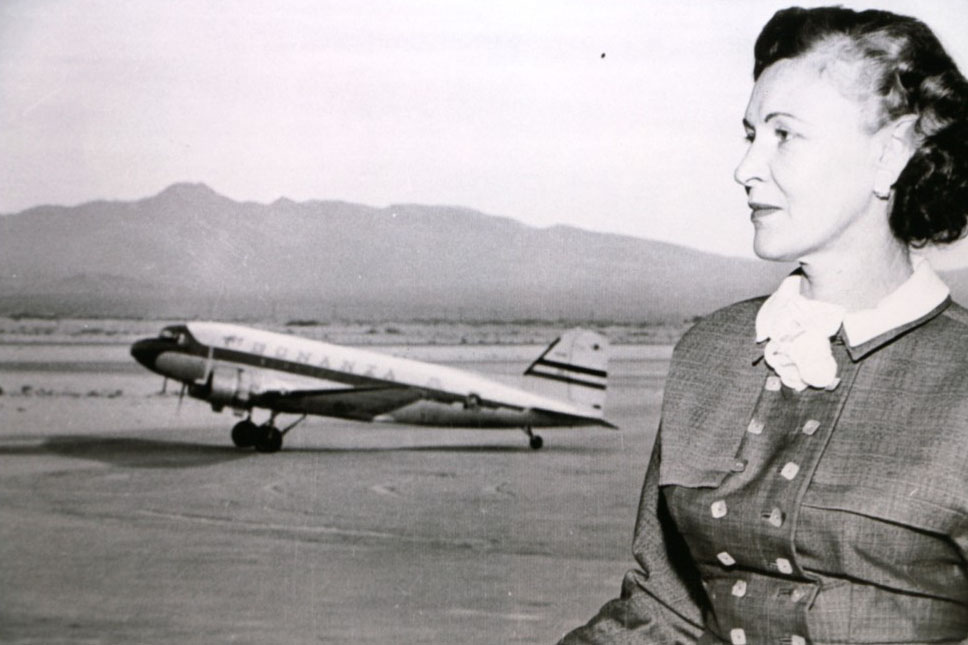 BonanzAir, which later became Bonanza Airlines, operated with three airplanes out of Sky Haven Airport. Florence Murphy would serve as vice president and secretary treasurer of Bonanza from 1947 to 1958. 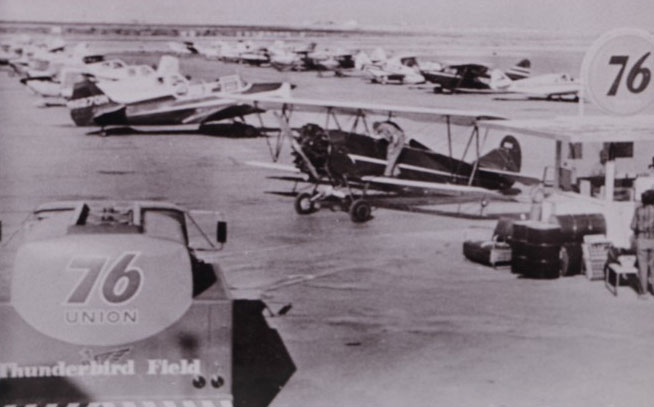 The airport was sold to Wes Durston and renamed Thunderbird Field. That same year, runway paving began, along with the construction of a shade hangar and a combination administration office and restaurant building. 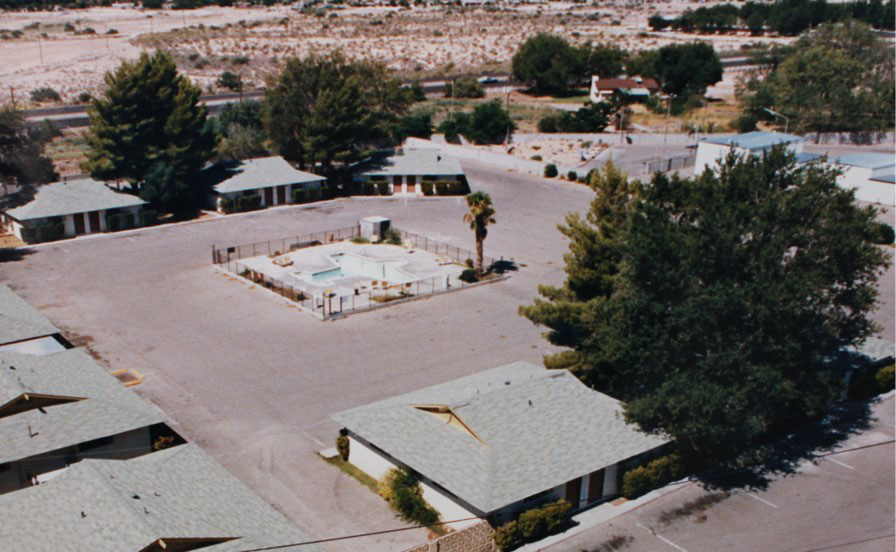 The 40-unit Sky Rider Motel was built. The motel featured an airplane-shaped swimming pool, which was visible from the air.

The FAA classified the North Las Vegas Air Terminal as a general aviation reliever airport for McCarran International Airport. A portable air traffic control tower (in the photo above, at left) was established in December 1975. 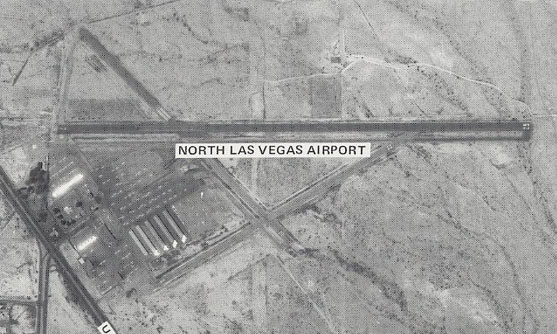 Clark County purchased North Las Vegas Air Terminal for more than $16 million from the Summa Corporation on October 1. Shortly thereafter, the county purchased another $7 million in land around the airport to ensure future compatibility, bringing the total acreage to 823. 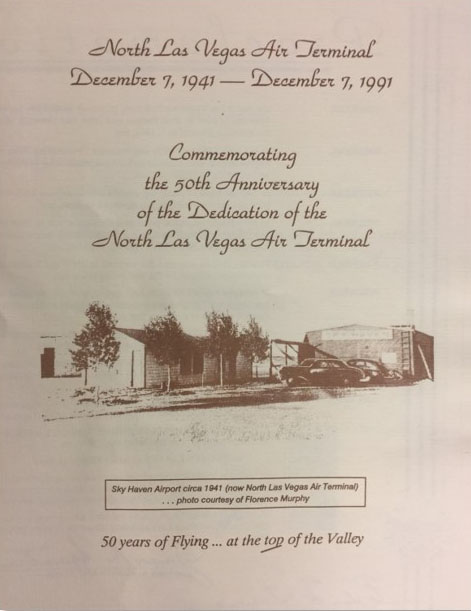 In August 1990, construction began on airfield rehabilitation projects and was completed in October 1991. Runway 12-30 was reopened at an expanded 5,000-foot length and new taxiways Alpha and Bravo opened. December 7, 1991, marked the 50th anniversary of the airfield, as well as the completion of construction projects providing airfield lighting, navigational aids, 20 acres of new ramp and an extensive flood control system. 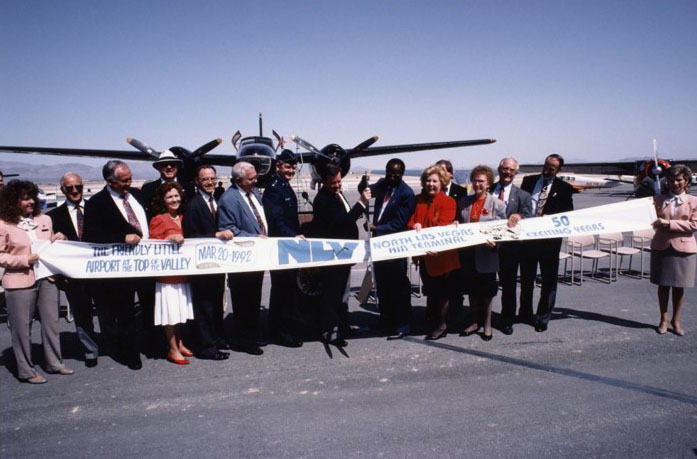 On March 20, the new 15,600 square-foot southwest-style terminal building was dedicated. 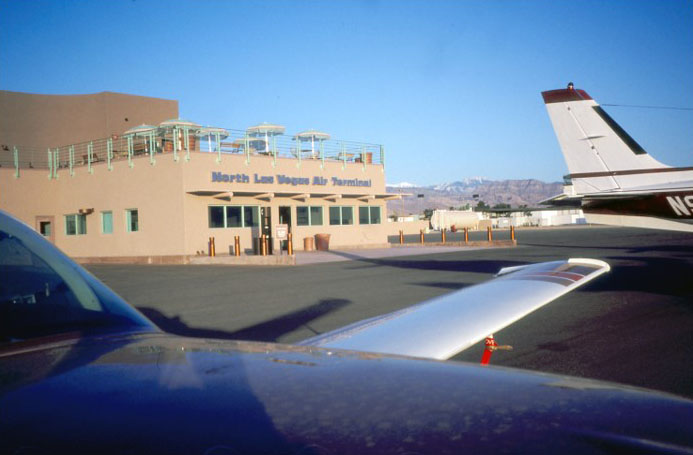 It included a pilots’ lounge and a restaurant with an outside deck overlooking the airfield. 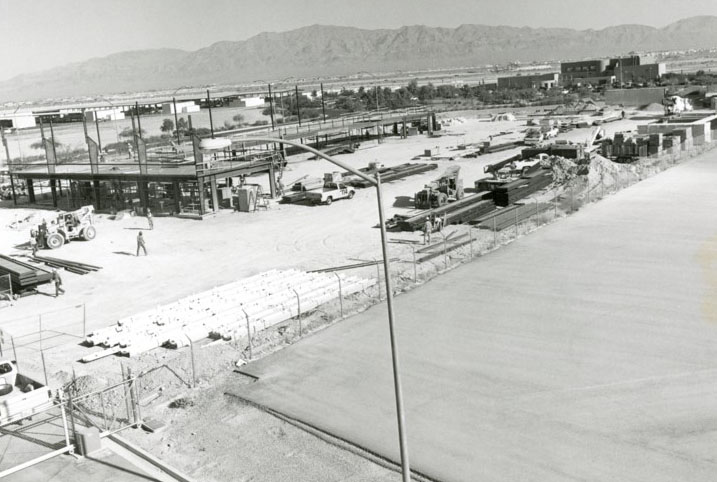 Construction began on the 5,120-square-foot Agency Air Park building and infrastructure. It consolidated all of the government agencies operating out of North Las Vegas into one area for security and accessibility purposes. Construction was completed in 1995. 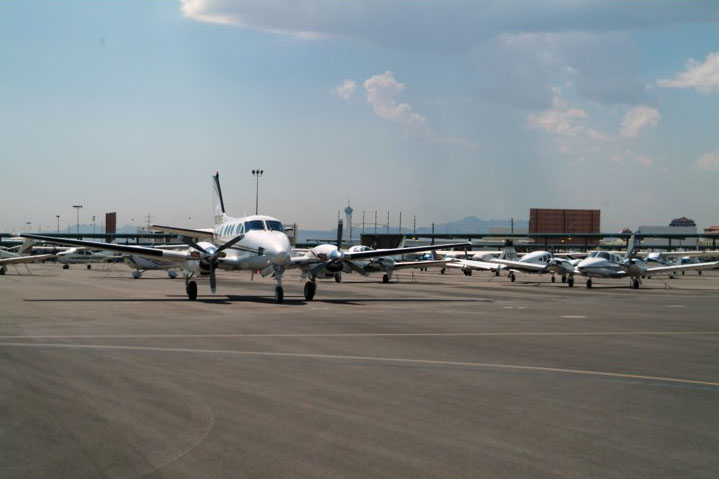 December broke all previous records for the number of aircraft operations, which topped the 216,000 mark. 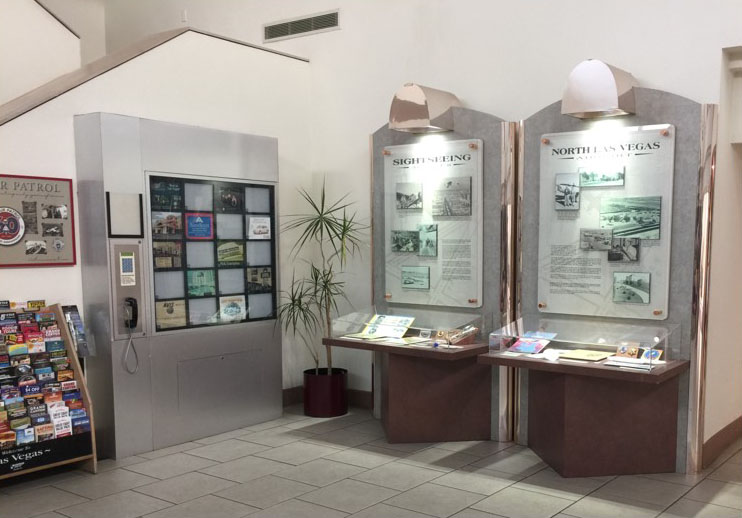 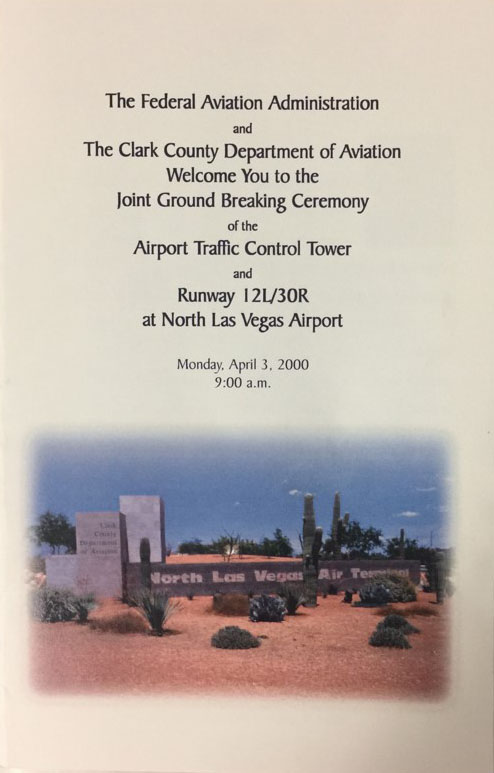 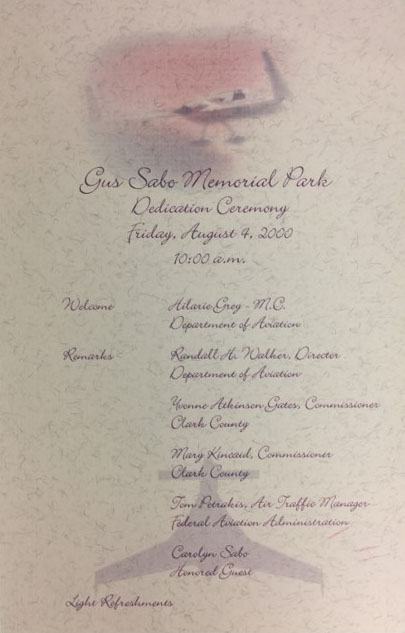 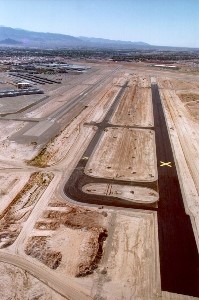 In 2001, Runway 12L/30R, equipped with an Instrument Landing System, was added to provide additional capabilities to the airport including precision lateral and vertical guidance to aircraft approaching and landing on the runway. This enables safe landings during low visibility meteorological conditions, such as low ceilings, fog, or rain. Additionally, it allows student pilots the ability to train on these critical navigation systems.

Also in 2001, a FAA Air Traffic Control Tower was built and began serving pilots with ground-based controllers by directing aircraft on the ground and through controlled airspace. It provides advisory services to aircraft in non-controlled airspace. This enhances safety by preventing collisions, organizing and expediting the flow of air traffic, and providing information and other support to pilots. 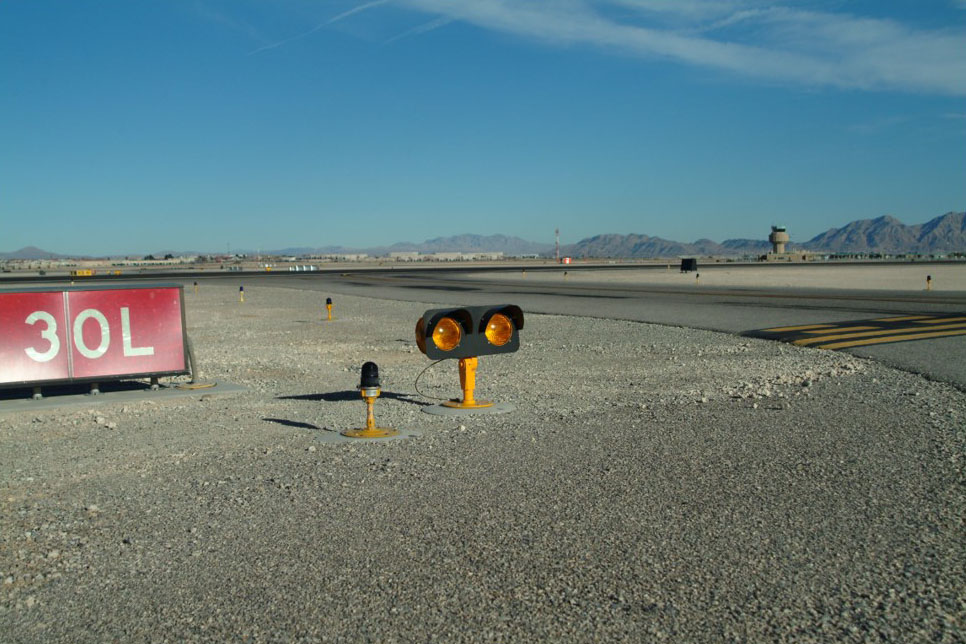 Runway guard lights were installed as part of an FAA project. North Las Vegas Airport was the first general aviation airport in the country to receive elevated guard lights as a means of enhancing safety.

In 2007, the airport's ability to handle airfield precipitation was improved with the installation of a network of drainage channels that improved airfield drainage and directly tied into the city’s flood control system. 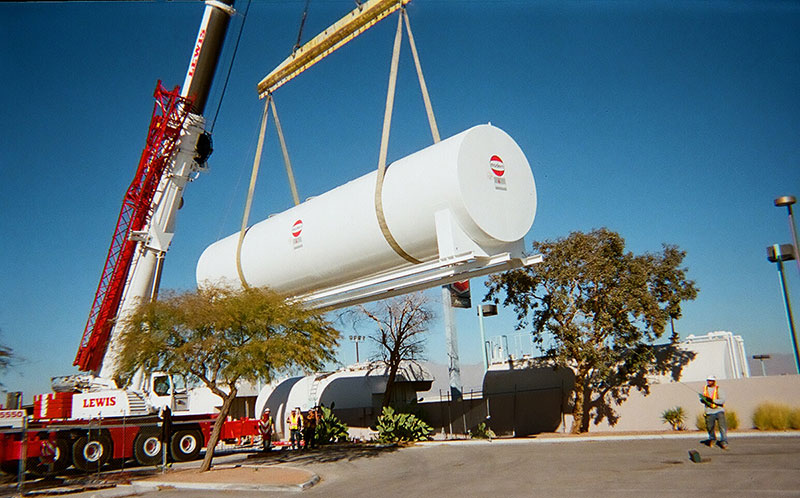 In 2008, VGT's Jet A aircraft fuel capacity was increased by 30,000 gallons by installing an additional large fuel tank, making the airport capable of servicing the increasing number of aircraft using the airport. 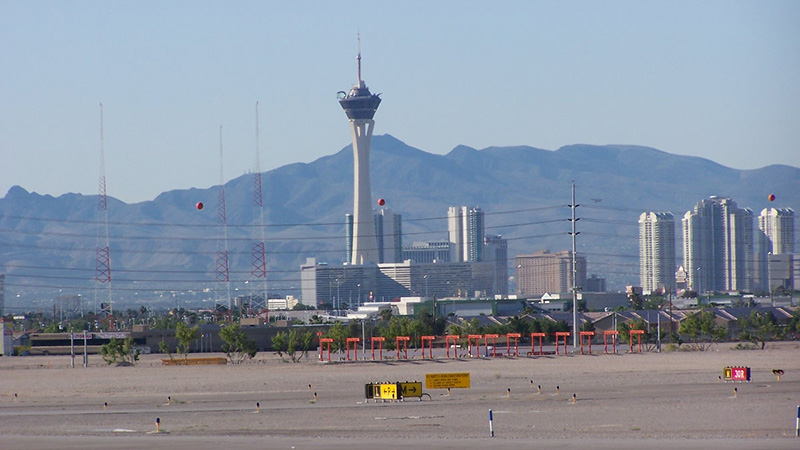 In 2009, safety for arriving and departing aircraft was improved by de-energizing above-ground high-tension power lines and dismantling the 100-foot towers in favor of new underground lines. These towers and power lines created a potential obstacle for aircraft taking off and landing on two of the airport's busiest runways.

In 2010, the Las Vegas Metropolitan Police Department constructed a modern hangar and facility to support critical Search and Rescue operations that operate from the airport.

Also in 2010, state-of-the-art Environmental Protection Agency certified facilities were installed to enable the airport sweeper to cover large areas of the airport without the need to service the vehicles off-site, reducing foreign object debris. This system enables the airport to safely dispose of containment surface material while protecting the water system.

In 2011, Drainage channels near the runways were redesigned using box culverts to eliminate the potential of hard stop hazards for aircraft.

In 2013, the navigation of taxiways Alpha, Golf & Foxtrot was improved to provide pilots with simplified guidance on the airfield in areas that had caused confusion in the past.

In 2015, North Las Vegas Airport conducted a Wildlife Hazard Assessment. Wildlife Hazard Assessments help identify and minimize risks of aircraft-wildlife collisions and in turn save lives — of both humans and animals — as well as repair costs and damaged aircraft downtime. A Wildlife Hazard Management Plan (WHMP) was developed in cooperation with Airport Wildlife Consultants. The WHMP outlines habitat management techniques on and around the airport that reduces or eliminates the area’s attractiveness to wildlife.

In 2019 an extensive remodel of the North Las Vegas Airport main terminal was completed. To reflect the dynamic community that it serves, the Clark County Department of Aviation invested $1.8 million in the renovations. A new contemporary ceiling, sparkling terrazzo flooring, stainless steel column surrounds, upgraded FBO areas and restrooms, and a new color palette give the building an updated, modern look and feel. Custom artwork on the walls at the north main entrance and in the Grand Canyon Room enhances the modern look while showcasing the importance of the airport in the local aviation community. The designs consist of overlaying lines depicting runway configurations, flight arrival and departure tracks, helicopter tour paths, and the airspace surrounding the airport. This investment provided North Las Vegas Airport the opportunity to qualify for membership in the Air Elite Network.

In May 2019, North Las Vegas Airport became an Air Elite® member by meeting strict criteria for facility and service standards. Air Elite® is a network built to elevate FBO service and facility standards to the level of the legendary diamond standard in hospitality. Each Air Elite® FBO is a member of the World Fuel Services Network. By investing in the remodel of the terminal building and ensuring the highest level of customer service and safety training for our employees, North Las Vegas Airport is able to offer quality services in an upscale facility that aligns with our Air Elite motto: Airport Professionals serving Aviation Professionals. We maintain these standards continuously and will undergo thorough annual quality assurance audits and facility checks. 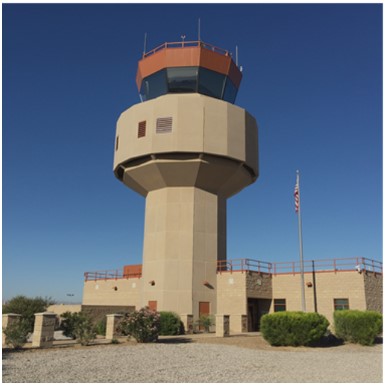 In 2019, VGT had 176,131 takeoffs and landings, making it the second-busiest airport by operation in Nevada and number 63 in the nation.

The primary mission of North Las Vegas Airport (VGT)is to increase airspace capacity for commercial airlines and to reduce congestion by attracting as many small general aviation aircraft as possible from McCarran International Airport.

The airport encompasses 911 acres, more than LaGuardia in New York, Midway in Chicago and Reagan National in Washington D.C.

Capital improvement projects for the next year include a terminal interior remodel.